Some people think that when you become a Christian, all your troubles go away. They naively assume that once you are saved, everything in your life will fall neatly into place. In fact, they think if you have any problems, there must be something faulty with your faith.

But nothing could be farther from the truth. It is not only foolish to think we will never face difficulties in the Christian life, it is downright dangerous. If we think we will never encounter any trials, we will set ourselves up for a great fall and be sadly disappointed.

The reality is, we all need a shepherd—someone to guide us through our many adversities, someone to protect us from encroaching evil, someone to calm our troubled souls. That someone is the LORD Himself.

The author of this psalm, David, was a man after God’s own heart. And despite his great devotion to Him, he often found himself walking through the dark trials of life. He pictured these tough times as “the valley of the shadow of death.”  These were not imaginary dangers, but painfully real ones.

We can all relate to David. None of us are exempt from sailing through the storms of life. We live in a fallen world with many threatening perils. In these difficult times, we must recognize the Lord’s calming presence and receive His comforting peace. That is what we see evidenced in this psalm.

“The Valley of the Shadow of Death”

David begins this verse, “Even though I walk through the valley of the shadow of death.” This imagery depicts a shepherd leading his flock from one grazing place to another. In order to guide them to the next grassy field, the sheep would often have to squeeze through a narrow pass that was surrounded by high canyon walls and jagged cliffs.

The tall mountains blocked out the bright sunlight so it could not shine into the valley. The dark shadows made it a dangerous place for the flock. Lurking in the shade were threatening animals and ruthless thieves who would hide and attack the vulnerable sheep.

David envisions himself as one of these defenseless sheep, going through many life-threatening circumstances. He is not spared from walking through these perilous places—and neither are we. This is why we need a shepherd throughout our life’s journey.

“I Will Fear No Evil”

In the midst of his most difficult trials, David says, “I fear no evil.” The word ‘fear’ means “to suffer dread or terror.” What would otherwise cause him panic does not trouble him in this hour of trial. Though surrounded by evil, David experiences a supernatural peace from God that grips his heart. An inexplicable calm fills his soul.

The same is true for each one who knows the Lord. We do not suffer dread in our difficulties, not as the world that has no loving shepherd. We do not panic in our extenuating difficulties as those who have no hope. We know that the Lord is in control of our lives. He has already numbered our days. Nothing will take our lives until the appointed time.

“For You Are With Me”

This overruling peace comes because David can say, “for You are with me.” He knew that God was with him every step of the way. As he passed through “the valley of the shadow of death,” David believed God was with him, protecting and preserving him.

This calming peace distinguished David from the fearful unbelievers in the surrounding nations. Even in his adversity, he did not act like the Lord had abandoned him. Such a mindset would be practical atheism.

David believed that nothing could come into his life except either God sends it or He allows it. But either way, God sovereignly rules over it.

When Satan spoke to God about Job, the evil one challenged Him to remove the hedge of protection around Job. But God set the boundaries by which the devil could bring devastation into Job’s life. Though Satan carried out his ruthless attack, it was within the boundaries that God established. Even this hellish attack remained under the control of His sovereign will.

Jesus promised us, “I am with you always, even to the end of the age” (Matthew 28:20). His constant presence gives supernatural encouragement when we find ourselves in the dark valleys of life. Even on our deathbed, the Lord is with us to give us dying grace. He gives us the assurance that on the other side of death is the outstretched arms of the Lord Jesus Christ to receive us.

While awaiting trial in Rome, Paul knew this peace when he said, “For me to live is Christ, and to die is gain” (Philippians 1:21). He knew the Lord was with him, and to die would be the entrance into His immediate presence.

Only God can give us this composure in the midst of difficult circumstances.  This does not mean that we are never troubled. But it means in the midst of the storm, we can know His calm.

“Your Rod and Staff”

David adds another aspect of the Lord’s care, “Your rod and your staff, they comfort me.” He was well-familiar with a shepherd’s “rod” through his earlier work with his father’s flock. It was an oak club about two feet long that was used to defend the flock against vicious wild animals. Any beast would have had to come through David to harm any one of his sheep.

These two instruments—a shepherd’s rod and staff—are emblematic of the Lord’s sovereign and protective care over David’s life. These instruments brought him “comfort” as he walked through the dark valleys of life.

This word “comfort” comes from the same Hebrew word (naim), from which the prophet Nahum and Nehemiah derive their names. It indicates the inexplicable comfort they knew and ministered with during difficult times.  This is the same soothing reassurance that God alone could have given to David when dangers surrounded him on all sides.

This does not mean that David never experienced emotional trauma or sinking spells of depression. The many lament psalms he wrote reveal the fear he often felt. But in the midst of these turbulent times, David found steady comfort in his ever-present Shepherd.

The word ‘comfort’ can also be translated: “to change the mind.” The idea is that the presence of our Shepherd changes the state of our heart in dangerous times. He gives us the peace that He alone can give in the storms of life.

The best of us are still but sheep. In our weakness, His strength is made perfect. We must stay close to our great Shepherd as we walk through dark valleys. We may not be able to see all the threatening dangers around us, but He can. All we need to do is follow Him, and He will lead us home. 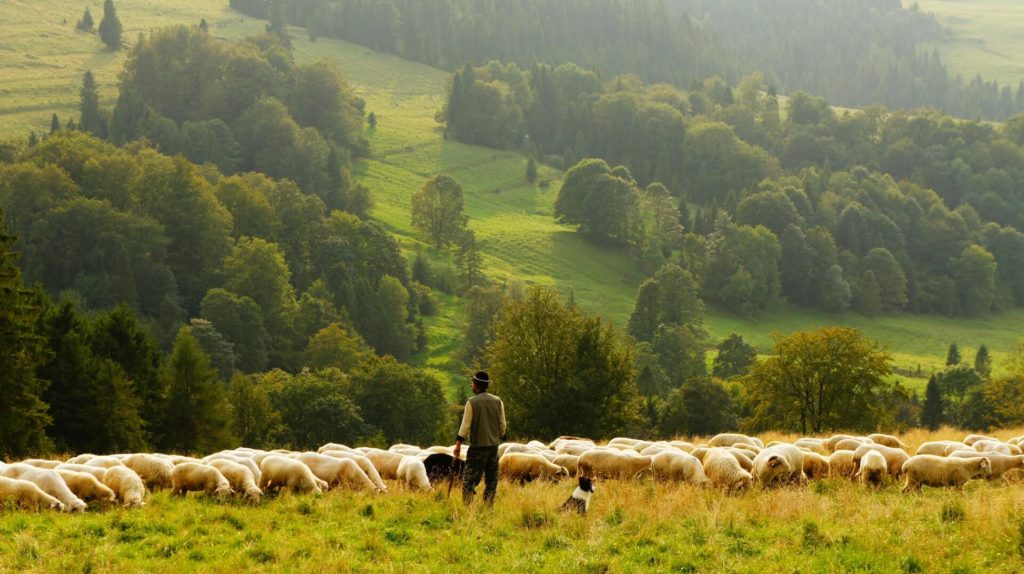